The Open Ceiling and the Eagle 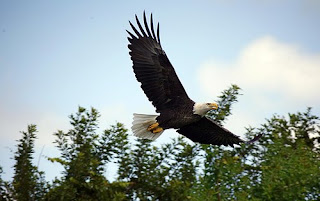 
The Open Ceiling and the Eagle
There was a silver suited alien on the patio at this house on Corning Street, . . but before that:

Before that, . . . I’m lying on my back in bed. I remember this as vividly as if it happened this morning; I also remember this as a “dream” but it was so damn real, I told myself afterwards it was a dream, because it doesn’t make sense that it could be real.

I’m in bed, in the middle of the bed, which is huge, though in "reality" my childhood bed wasn't huge. Flat on my back. I’m both excited -- exhilarated -- but also a bit scared, not understanding what’s going on. There’s some confusion; my father is here, and I don’t understand why. He doesn’t live with us and he wouldn’t be here at night. My father, mother and grandmother are standing in the doorway; they can't come in for some reason. They're watching, but something prevents them from coming closer.  There’s a lot of activity, but I’m in the middle of my bed, which is huge,I'm kind of spread eagled, I can’t move. I have a sense of being tied up, but I don't see anything that's tying me, but something is preventing me from moving.I feel both fantastic and a little disoriented. Lots of bright, bright lights; everything is lit up so white. I look up at the ceiling, and it opens up, opening from the center, two halves moving back to expose the nighttime sky, which is beautiful, full of inky blue and shimmering stars. I think this is a pretty neat trick. A giant eagle flies down from above; the eagle is so large, it fills the sky, fills the open ceiling. It comes down straight at me. I don’t like this too much. I’m not exactly frightened, but it’s not comfortable. The eagle takes me up into a silver disk type thing. That's all I remember...
Posted by Regan Lee at 12:09 AM