One Hell of a Heavy Dream About Aliens 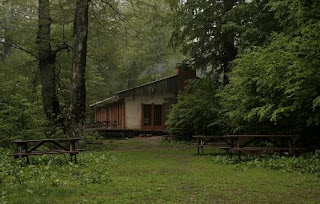 Last night I had a very intense and vivid dream; a lucid dream (waking up during the dream commenting that I had to be sure to write it down and tell it to others when I awoke) and I even woke up during the dream, went back to sleep, and continued the dream.

BEHIND THE SHED
I'm talking with my mother, who tells me she ran into the woman who lived next door to us when we were kids.(we lived in Los Angeles, time frame would be the early 1960s.) The woman "Mrs. Smith" told my mom she had reclaimed a patch of yard from behind our shed.

(In real life, we did have a neighbor, we did have a long narrow shed that we rarely used or went in back of. There were some overgrown bushes completely covering a fence; a house in back of that, and Mrs. Smith's on one side, an alley or walkway on the other and the alley behind that.)

After a lot of pressing on my mother's part, I did remember. And I became unglued. For yes, I did remember: going back there with my grandmother all right. I remembered the abuse; the sexual abuse that went on back there.

I couldn't believe it. I was devastated. In the dream, I was crying, all these memories just came flooding in. I was screaming at my mother: "All these years, all these years! And why now, at this late age? Why now, after so much time, do I finally remember this horrible past?!"

I am just so ... angry, and sad. And yet somehow I'm not surprised. In the dream, I say that I have to tell others, and deal with this.

SPONTANEOUS DRAWINGS
A few days go by. My mom and I are in the house we grew up in (the one where, in "real life" she saw a UFO, and where I had my interactions with the "puppet wolves" and my "invisible aliens.") I tell her I have something extremely important to tell her -- to show her. I am agitated. Scared. I have a sense of urgency.

She asks me if it's about my grandmother, and what happened behind the shed. Yes, I say, but. . .

I remembered, a sort of dream within the dream that, yes, my grandmother and I did go behind the shed, but it wasn't abuse. She did not abuse me.

She and I had interactions with aliens. We'd go back there to meet with them.

Then I showed my mother drawings I made of what they looked like. Oddly enough, not of their faces -- it seems even in dreams I can't remember their faces -- but drawings of their hands, which were sort of claw like, semi-webbed hands, and their clothing, wide, red sleeves stopping just short of their wrists. I show her these drawings I've made, in colored pencil, that I've scanned into the computer. I'm scrolling through on the laptop, showing her drawing after drawing.

I am shocked that I remember this in such detail and it all comes back to me, after all these years, and in such a spontaneous way. I am not happy; this isn't a good thing and it's scary. I realize I have to tell people. In fact, in the dream I speak with one UFO researcher who tells me it's unusual to have "spontaneous recall" in such detail. He's surprised I remember this without being hypnotized.

I don't like this at all. Not at all.

Well, dreams are strange. Relating dreams are always tricky, for one thing, most people (at least in this culture) think they're boring, unless they're your own. And it's impossible to convey the emotional strength, the intensity of a dream. In this dream, the emotions were just overwhelming, along with the fear.
Posted by Regan Lee at 9:33 AM No comments: