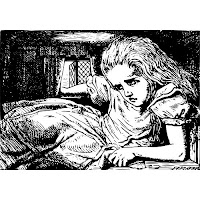 A disturbing dream the other night. I can't shake the creepy emotions of the dream, which had a very strong "invisible alien" UFO vibe to it, even though no UFOs or aliens were seen in the dream.

in the kitchen of the house I grew up on Sherbourne Drive in Los Angeles. I'm me, now, kind of, but in typical dream logic also younger, in my late twenties, maybe. It's nighttime, I can see the inky prussian blue sky outside the kitchen window, and the overhead kitchen light is on. The light bothers me; it's very bright and harsh. Everything is out of the kitchen, except for what I assume is the big silver refrigerator behind me (ours was green, and then we had a brown one, but never silver) and the kitchen is flooded with water. The water comes up to my ankles. I'm trying to mop the water up with an old fashioned type of mop, but it's a big job. I can't leave; something, or someone, is keeping me here. I feel like I'm in a fairy tale, where the job must be done, as dictated by the non-human creature: fairy, elf, troll, witch, etc. I'm kind of like Alice; growing taller, the kitchen is becoming smaller. I have the acute sense that a UFO is just outside, and the aliens -- those small, invisible spindly little creatures that I can't see but know, without any doubt, are there -- are watching me.


I just remembered that before going to sleep, I did my intent thing of trying to get at some of this UFO stuff in my life, retrieve some information, memories, of experiences.
Posted by Regan Lee at 1:07 PM 1 comment: