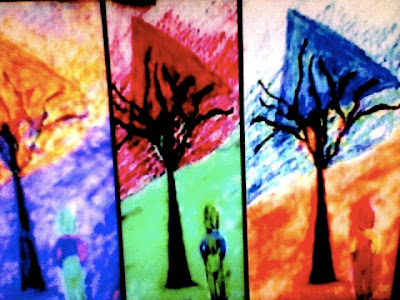 A few years ago I was playing around with manipulated images of UFO themed drawings that I'd done,inspired by my own sightings. Here's one of the triangle I saw in Dexter, Oregon, many years ago.
Posted by Regan Lee at 4:17 PM No comments:

I wrote this for UFO Magazine's blog last night, after watching UFO Hunter's episode on the orange orb sightings. I found that what the witnesses were describing matched much of my own sighting of an orange orb many years ago in Eugene, Oregon:

Watching this episode of UFO Hunters ("Dark Presence") about the orange orb UFOs seen in recent months was an intensely personal experience for me because of my own orange orb sighting.

It seems that witnesses have been seeing orange (and sometimes green or other colored) orb UFOs. These are not orbs as in spirit orbs, which are very different, but spheres -- round objects -- that are craft, or machine, or something "nuts and bolts."

These sightings are occurring now, but go back a ways as well. One woman who appeared, her identity disguised, saw one of these orbs when she was child. My own sighting took place over twenty-five years ago in Oregon.

There are many parallels to my orange orb sighting -- and the sighting that started me on my path of exploration into UFOs -- and the ones discussed in the UFO Hunters episode. Many witnesses reported feelings of dread, of fear, though some had experienced feelings of elation, upon seeing these orbs. I had both: feelings of a happy intrigue when I first saw the orb, and a real goofy, almost psychedelic response right after seeing it. And yet, even though I actually walked to the front door after going inside, with the intent of going back outside to look for the orb, I couldn't do it. I couldn't open the door. I remember thinking how odd it was that here I just saw an incredible thing -- experienced an incredible thing -- yet couldn't make myself go out to look further. I also had the most terrifying dreams of my life right after seeing the orb. These dreams were always the same: I'm paralyzed inside a brilliant white beam of light that is so bright I can almost see through things. There is something huge above me, some kind of object. My husband is nearby but has been taken from me and I'm screaming for him, for "them" to return us to. . . or get us out of, wherever the hell we are.

These orbs were described by witnesses as being basket ball sized, or even larger, like a beach ball. That's exactly how I've been describing the size of the orb I saw all these years. Witnesses also said they felt a premonition, or some kind of telepathic communication between the orb and themselves; I also had that experience when I first saw the orb. I had glanced up having noticed the orb, which I estimated to be about a mile away. I had the distinct feeling it was waiting for me, and as soon as I thought "What the hell is that thing?" it zoomed right to me, following us along the road. As we turned the corner to go home (our house was right around the corner) the orb stopped for a moment above a house across the road from us, then just sank down, "landing" in their backyard. Similar behavior was reported by witnesses on the UFO Hunters episode.

People have asked me if there were lights on this thing, and I've always described as a real, physical craft (as opposed to a cloud, or a spirit orb, etc.) and no lights on it, or around it, but lit from within. Witnesses on UFO Hunters described their orbs the same way.

Missing time was mentioned by at least one witness; I also experienced missing time in connection with this orb.

On this last point, there's something very strange. To this day, after countless discussions, my husband and I still differ on some things. These points where of disagreement were brought up again as we were watching UFO Hunters. He insisted we saw the orange orb when we lived on Hilyard street... I had to remind him of the detail of that sighting, which happened when we were on Friendly street. He seemed to then remember that yes, we were living on Friendly street when we saw the orange orb, but the missing time happened when we were on Hilyard, during a different UFO sighting. But neither of us can remember where we were coming from when we saw the orb. Where had we been? Why can't we remember? It was dark when we saw the orb; where would we be coming from in that direction? We were on our way in back to town when we saw the orange orb-- so where were we? We don't know. Does this mean we have had three episodes of missing time?

Recently, I posted on my blog The Orange Orb my experiment of trying to remember these missing time events. Maybe with focused intent, through dreams and other methods, I can uncover what happened.

When I had my orb sighting all those years ago, I read every book I could find on UFOs. I found all kinds of fascinating information, but nothing that came close to describing what I saw. Yet UFO Hunters showed us that these orb sightings have been experienced by many, and are happening now.

Was the orb I saw the same kind of orb talked about in UFO Hunters? Sounds like it. While the time line is different -- mine was over twenty-five years ago, and, from what I could find at the time, didn't seem to match up with any reports -- there were witnesses who'd seen orbs long ago, as well as more recently.

Lots of speculation on what the orbs are of course from witnesses and researchers, but we can't say for sure. What did I see that night? An orange orb lit from within, the size of a beach ball, that followed me, seemed to be waiting for me, could read my thoughts. Where did it come from, who made it and why, what did it want -- those are questions I have no answer for, even after all these years.

Post script: I wrote this last night right after watching the UFO Hunters episode. That same night I had the following dream that, while no UFO or alien was present, or even alluded to, had a very strong UFO vibe to it. When I woke up, the first thought I had was a clear "That was about my orb sighting. . . "

Nervous Wolves
It's nighttime, and very, very dark. Ink black. I'm outside the house I live in, which is a white, small little building -- there is only an upstairs, like a small apartment, that is reached by a narrow flight of stairs. The stairs are inside, in other words, they're surrounded by walls. There's nothing underneath, just the covered stairs leading up to the apartment, which sits on a little hill. This place is surrounded by woods, the trees are bare. It's impossible to see into the woods since it is so dark.

For some reason, I'm outside the house/apartment. I'm surrounded by my "pets" which are wolves, and wolf hybrids. The wolves are very nervous, agitated. Even though these animals are "mine" we have an odd relationship. I find myself wondering why I have wolf hybrids as pets, since I don't think people should own such animals (neither wolves, or, hybrids) and I would never own such beings. Yet I've ended up with them somehow. They are my protectors in some ways, yet are also unpredictable. I'm a little wary around them.

I'm also concerned, they're skinny. I wonder why, have I not been feeding them properly? Then again, some of them have just sort of shown up from "out there" and joined us. I feel responsible for them.

So here we are, out in the ink black night, starless, on a grayish hill of parched grass. Something awful has happened in the woods, many of the wolves come running up, and we all run up the stairs into the house. There is a man in uniform kneeling down inside, working on something, some kind of control panel or machine or something. He's human and kind of creepy. I tell him he has to do something, that there's some kind of creature out there attacking my wolves. "Maybe a rabid raccoon, I don't know, something, but we have to kill it" I say. He ignores me, he's pretty cold. There's also something about another man who kind of sneaks off, thinking I didn't notice. I also wonder what the hell these guys are doing in this, "my" house, but I also know that they're in charge. Since they're in charge, I demand they protect us, fix things. But they don't.

All I care about are my wolves, and myself of course. . . just save us, get us the hell out of here, and take care of that nasty thing out there that's trying to hurt these poor wolves who aren't hurting anyone.

That's the end of the dream, or, all I remember.